Kotlin Vs Flutter: Which Should You Choose For Cross-Platform App Development? 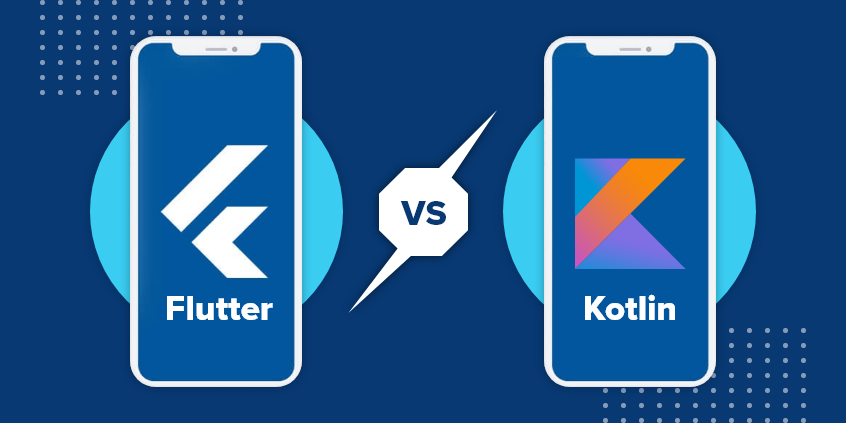 3 Hours 43 minutes- this is what an average US person spends on a mobile device every day. This fact is enough to show us the growing importance of mobile apps in our lives. But then, android app development or iOS app development can be expensive for startups and SMEs. Here, cross-platform apps lend a helping hand!

Shorter development time, reduced cost, and better user experience with advanced features are some of the major reasons why cross-platform app development gains ground across the world. It enables developers to come up with an app that seamlessly runs across Android and iOS platforms. Simply put, cross-platform apps can reach a huge market at a relatively low cost.

These days, many cross-platform app development platforms are available in the market including Flutter, React Native, and AngularJS. However, another candidate, a force to be reckoned with, has come that is known as Kotlin. Let’s compare Kotlin and Flutter from the developer’s perspective, and go through their pros and cons.

Before comparing these two robust cross-platform app development frameworks, we need to go through the basics of Flutter and Kotlin.

Since its launch in 2015, Flutter has gained popularity swiftly among developers. Started as an open-source mobile UI framework, Flutter has helped developers make native-like Android and iOS apps. In recent times, Flutter has evolved to support desktop, mobile, and web app development using the same codebase.

Also Read : Flutter vs. Swift- How to Choose the Right Framework for iOS App Development?

As per the AppBrain study, Flutter accounts for 0.24 percent of the app market to date. Flutter app development enables you to come up with the native-looking web, mobile, and desktop apps. Technical insights from Google and extensive support from a thriving community are added advantages for Flutter.

Big brands like The NewYork Times, Groupon, eBay, and Alibaba have embraced this platform for developing robust and reliable apps. What makes Flutter a preferred choice is its ability to secure mobile apps in a way the same as that for websites.

Kotlin has emerged as one of the highly adopted languages for developing cross-platform apps. It is second-based to Java and Google has adopted it as the first-class programming language for writing Android apps at Google I/O.

Today, the market share of Kotlin is over 9 percent. Microsoft Word and Samsung Experience Service are some of the Kotlin-powered apps. Kotlin uses Java Virtual Machine and bridges it with some functional pieces. As it overrides general programming errors successfully, developers consider it a highly reliable language and platform.

Kotlin Multiplatform is an additional feature of Kotlin that can be compiled to JVM bytecode, JavaScript, or native LLVM code. It can be effectively used for developing Android, iOS, web, and desktop apps like Flutter.

Simply put, Kotlin and Flutter have excellent things to offer to app developers to meet the diverse business requirements of modern enterprises. Let’s compare their most imperative metrics.

Flutter has ‘Hot Reloading’ functionality, which allows developers to make alterations more conveniently at the backend, and they can view these modifications simultaneously.

Talking about Kotlin, it compiles the code in the same format as the platform developers are using. It facilitates developers to come up with apps with enhanced and customized performance.

Flutter app development enables developers to leverage the benefits of widgets in line with the client’s business models. Flutter assists developers to come up with customized and user-friendly mobility solutions.

Kotlin multiplatform is highly flexible and gives liberty to the UI developers to create a customized, nativelike app without any restrictions. In other words, developers can build a unique app that aligns with the client’s business goals.

Flutter uses Dart as a programming language. Dart syntax is easy-to-understand and learn. Developers with expertise in JavaScript can easily learn this language. This is one of the reasons why we have many developers available for Flutter app development.

Both Flutter and Kotlin are open-source platforms, so there is literally no competition in the pricing. But, when it comes to testing support, both these platforms are different from each other.

Flutter can deliver a variety of features including a widget testing feature. Kotlin, on the other hand, focuses more on delivering backend development services. It also uses Firebase for securing backend options.

Do you want to have a quick look at the pros and cons of Flutter and Kotlin? Here we go.

It is quite a task to select the right cross-platform app development platform between Kotlin and Flutter. Both platforms offer extraordinary features. It is fair to mention that both these platforms have managed to have a strong presence on both Android and iOS app development domains.

Though Kotlin leads in terms of market share and usage, Flutter has an upper hand for offering native controls and plenty of features. As an entrepreneur, you need to select the platform that meets your cross-platform app requirements more effectively.

It is better to consult a reputed mobile app development company to find the right match for your app project.

Solution Analysts is a leading mobile app development company. We have teams of Flutter and Kotlin enthusiasts for developing innovative cross-platform app solutions. Since inception, we have worked on various cross-platform app projects across different industry sectors. Just send us your project requirements at info@solutionanalysts.com and we will get back to you soon.