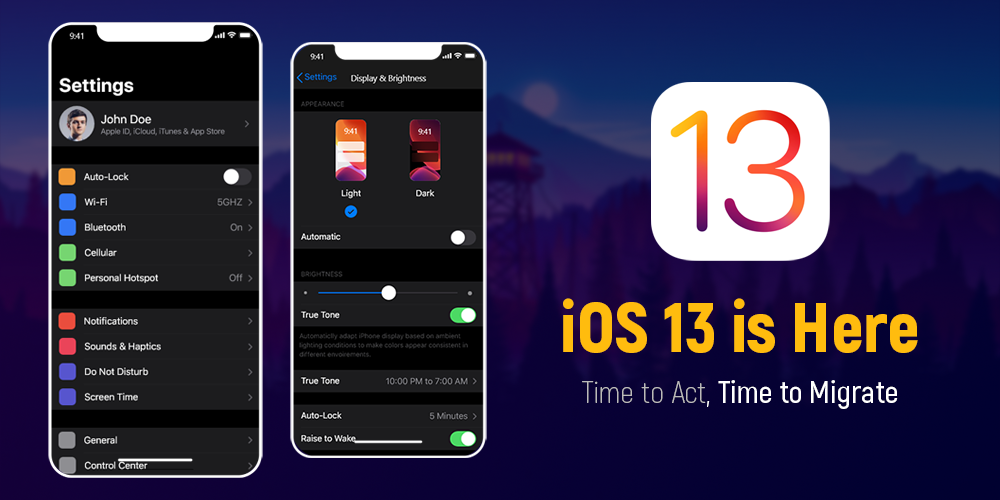 The WWDC 2019 was as exciting as developers expected. A new iOS version with cool features, separate OS for iPads, and the brand new Mac Pro. However, the latest version iOS 13 remained on the center stage with a plethora of new and engaging features including Dark Mode, Swipe to type, and Portrait image-related tools. What’s more, the iOS 13 is equipped with enhanced security features and performance improvements for a seamless experience across iPhone apps.

As an entrepreneur, if you have availed an advantage of iOS mobile app development services in making a user-friendly and feature-rich business app, then it is better to give your app a fresh look by migrating it to iOS 13. This migration will improve your app’s performance, and the addition of new iOS 13-based features will make it more competitive. If you do not have an iPhone app to date, then this is a great chance to enter the market with an advanced iOS 13-based app.

Here we list five major reasons to migrate your app to iOS 13 from a perspective of an iOS app development company.

Apple is known for offering the highest security to users and enterprises alike. The company enhances safety standards in all its iOS versions. Talking about iOS 13, features like location permission, and overhauling of sign-in process are a few indicators that show Apple’s concern for protecting the user’s privacy. From your business viewpoint, it directly reflects in your customers’ improved trust.

When you bring an iOS 13-compatible business app, your customers will appreciate its look and feel and remain assured for the safety of private information and confidential data. On the other hand, the iOS application development company can help you strengthen data security, and your employees will just appreciate a seamlessly performing and appealing enterprise iPhone app with user-friendly features.

Apple has already released the list of supporting devices for iOS 13. As per this list, excluding iPhone 6 and iPhone 6 Plus, all the recently launched iPhones are eligible of iOS 13 version. In such a scenario, it is necessary for you to update your existing app to extend support for iOS 13. In a way, you can increase the reach of your business.

Statista has reported that Apple has sold over one billion iPhones in one decade from 2007 to 2017. This fall, the Cupertino Company will bring several new iPhone models that run on iOS 13. You can target these users through an iOS 13-based or supported mobile app. In a way, migration to iOS 13 can help you increase the scope of your business app.

Also Read: Top Reasons to Make Us Believe that Swift is Future of iOS App Development

Faster Face ID-based login process, keypad with auto-suggestions, and Dark Mode are some of the noteworthy features of iOS 13 that are ready to attract people toward new iPhones. What’s more, iOS app development in the USA can also build robust business apps through utilizing performance improvements in various iPhone apps like camera and keypad.

For example, Apple has claimed that iOS 13-based iPhones will have almost 30 percent faster login process using Face ID. This feature works with the help of a machine learning technique. Also, Face ID is safer than Touch ID and makes your app more secure for employees or users. In the coming time, Face ID will go to the next level and your business app remains ready to integrate.

The iOS app development services can also assist you to integrate the necessary features of iOS 13 to make the most of this latest version.

With the release of iOS 13 and iPadOS, Apple has drawn a ‘smart’ line between iPad and iPhones. It appears that now onward, the company will focus more on iPhones while launching new iOS versions, whereas the newer versions of iPadOS will take care of iPad features. In other words, iPhones will get more room for improvement and feature integration in the future.

It is very possible that iPhone application development services will also pay more attention to developing apps that are more compatible with iPhones as compared to iPads in the future. Altogether, migrating to iOS 13 will keep your company app stay ahead of competitors with enterprise-friendly features and rich user experience.

The latest version of iOS 13 has many performance enhancements in several iPhone-related apps or features. For example, an iPhone’s keyboard can now suggest words like Gboard. This keyboard, known as QuickPath, will be offered with iOS 13. Also, this latest version of iOS brings new camera tools like Vignette, Vibrance, Auto Enhance, and Highlights to improve the quality of images.

Experienced iOS app developers can readily integrate the necessary tools and features of iOS 13 to improve the overall performance of your business app.

With this, it is fair to mention that iOS 13 seems to have a slight upper hand over Google’s upcoming Android Q to date. For example, it is possible to run iOS apps on MacOS as Apple has offered a developer tool called Project Catalyst. In brief, if you want to come up with an advanced enterprise-grade app, it is better to start with an iPhone app at this juncture. All you need to hire iOS app developers to develop a new iPhone app or migrate to iOS 13 platform.

The new iOS 13 offers a plethora of features for the iPhone app users. It is beneficial for you to update your existing app with iOS 13 compatible features. If still, you have no iPhone app for your business, time is just right to get one based on iOS 13.

At Solution Analysts, our experienced iPhone app developers are ready to embrace iOS 13. If you want to come up with an advanced enterprise iPhone app, just contact us at sales@solutionanalysts.com. Our expert consultants will get back to you soon.