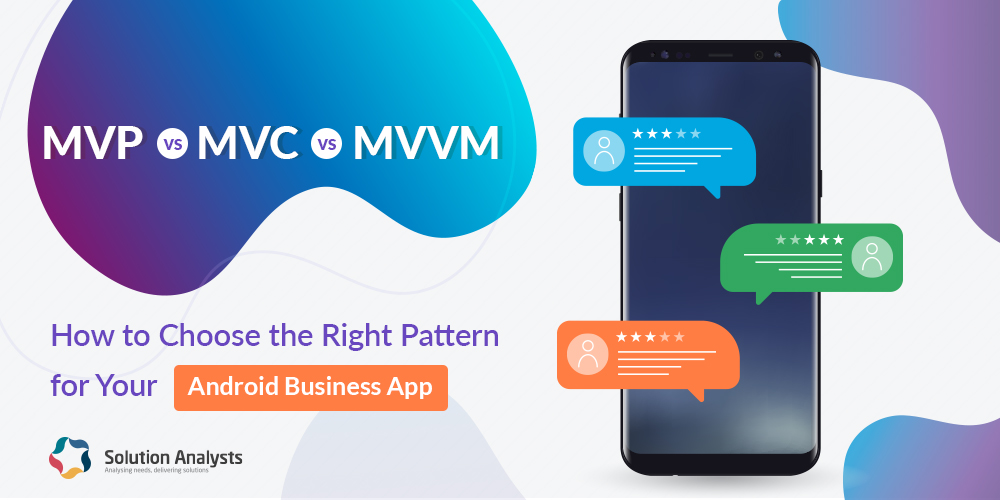 Let’s face it. It is difficult to stay ahead of the curve in the overcrowded Google Play. There, technology lends a helping hand. If you plan an Android app for your company, all you can do is selecting the right architectural pattern with an efficient decoupled system to excel. But then, it is difficult to choose the proper pattern and you need to consult mobile app development companies.

Here we are going to describe the two most popular Android app architecture patterns. They are known as MVC (Model-View-Controller) and MVP (Model-View-Pattern). But, before that, let’s go through the importance of good architecture for your business Android app. We will find the answer to the question- why does custom mobile app solution require an ideal architectural pattern?

Why Good Architecture is Necessary for Customized Android Application

The Android app project starts with the selection of app architecture. If one gets failed in picking the right architecture pattern chances are bright that they face the problems like

On the other hand, the right or ideal architecture can offer the following benefits to your business app.

Though there are three major patterns for developing Android applications namely MVP (Model-View-Presenter), MVC (Model- View- Controller), and MVVM (Model-View-ViewModel). But, here we will keep the focus on MVP and MVC architecture patterns.

Presentation- It is an outermost layer, which is responsible for the way of showing data to the app user. The MVP is a part of the presentation layer.

Domain- The core functions of the Android app are included in this layer that stays in the middle layer.

Data- It remains in the inner layer and responsible for the access of data.

MVP has quickly gained ground in the community of Android app developers. It is used for developing UI. It allows the separation of the Presentation layer from the logic. It takes care of every aspect ranging from the actual work of interface (backend) to its appearance (frontend). It is a UI pattern that can make the automated unit testing easy while providing the clean code. MVP is just a derivative of the MVC pattern, but it has gained more fame than MVC.

The Model
In Android app development, the Model is a data access layer like database API or a Remote Server API
It consists of components that handle tasks like generating, storing, exposing, and fetching the data
Above-mentioned functionalities are performed in the background as they are time-consuming and can block the main thread UI

The View
* The View is a passive interface that displays data and sends user actions to Presenter
* On the Android platform, it is represented by View or Activity
* It contains the visual part of the app
* It has the UI but lacks any logic or knowledge of the data displayed on the interface

The Presenter
* It is between Model and View. It triggers business logic and enables ‘the View’ to update
* It receives data from the Model and shows the same in the View
* It interacts with the Model to fetch the data and transform it to update the View

It is fair to mention that MVP can readily fulfill the requirements of Android app developers, and therefore, it is a preferred choice.

MVC (Model-View-Controller) or Standard Android
The Standard Android is a default approach for Android app development. Here, the ‘Activity’ and ‘Fragment’ act as a ‘Controller’, and resources are a part of the ‘View’.

Now, the problem with the Standard Android is the ‘Controller’ part is very large, which makes its testing difficult for the Android app developers.

The Model
The Model is a data layer. It manages the business logic and handling the network.

The View
It is a way of representing the data that is fetched from the Model. We can consider the View as the User Interface (UI) layer.

The Controller
Basically, the Controller is the logic layer. It bridges the gap between the user and the Model. It gets updates from the user’s behavior and prompts the Model as per necessity.

MVC Challenges
The MVC pattern restricts the Android app development to some extent. Though it is a standard Android pattern, it fails to come up with a robust app that has a clear code. MVC makes the code more complicated thereby making the testing procedure more complex. The Android app developers cannot perform the unit test as well with MVC pattern. In other words, the MVC pattern fails to meet the developer’s requirements.

Reasons why MVC bring challenges for App Developers
* App development using the MVC pattern is challenging for two reasons.
* It changes the UI continuously
* It lacks flexibility as per the developer’s requirements

After getting information about MVP and MVC, you would certainly like to know more about how to select the right pattern for your business app. We will state the key differences between the two patterns MVC and MVP to help you choose the right one for your Android-based business app.

Why MVP has an edge over MVC

It is better to consult a top Android app development company to get expert advice on this matter. Such a company can consider the project requirements and other aspects to give you the right solution.

Since inception, we have offered the best-in-class Android app development services to the global corporate clientele. We can develop and deploy advanced mobile app solutions using a proper architecture pattern as per the project requirements.

Whether you have a query regarding Android architectural pattern or an app concept in your mind, Solution Analysts can be your one-stop destination. Just get in touch with us by sending an email at sales@solutionanalysts.com and we’ll get back to you soon!