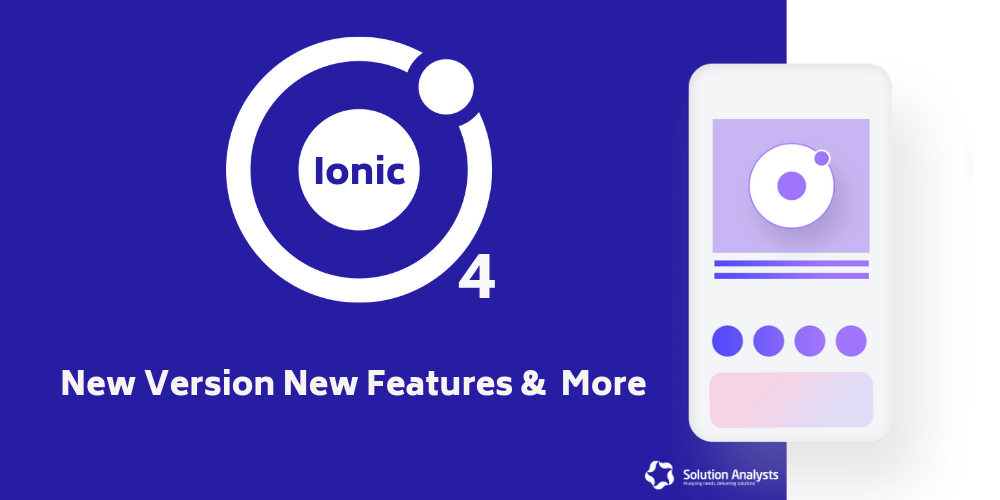 The Ionic platform needs no introduction. It is one of the most preferred hybrid app development platforms. As an open-source framework, it enables the developers to build a business app with excellent look and feel with an interactive UI. The Ionic framework consists of various out-of-the-box components to develop scalable apps rapidly. Recently, the framework has introduced the latest version as Ionic 4, popularly known as ‘Ionic for Everyone.’

Regarded as the best Ionic to date, Ionic 4 is the most accessible and robust version. It is the fastest version and around 100 components of this version have been evaluated for performance. As a result, each component of Ionic 4 can match the latest standards of iOS and Android app development. After almost two years of extensive research and dedicated efforts, the beta version of Ionic 4 was released three months back.

Though Ionic 4 is developed in line with Ionic 3, this latest version has more advancements from the perspectives of functionality, multi-framework functionality, documentation, and build-time. What’s more, the latest version has also brought a transition tool to make migration from the Ionic 1 to Ionic 4 easier. With the advent of Ionic 4, the Ionic app development services can enable the developers to make mobile progressive web apps using the Ionic platform.

It is fair to mention that Ionic 4 includes excellent tools, concepts, and technological advancements that can be readily used with React, Angular, etc. Apart from mobile app developers, Ionic 4 enables the web developers to access Ionic component for building progressive web apps. The arrival of Ionic 4 has made the Ionic framework modern and web-based design system.

Related Reading- Why should You Opt for Ionic to Build Enterprise Application?

Ionic 4 has brought groundbreaking features that can revolutionize the Ionic app development services in coming time. The latest version is not limited to Angular and developers can retract or rebuild apps with little efforts by using it. Ionic 4 also offers a few web components in the form of an array of APIs. It is possible to develop reusable and customized HTML tags that can be used in web apps and web pages with the help of Ionic 4.

– Capacitor
It is a code extension layer and cross-platform API. From calling native SDKs to writing custom plugins, this API can serve a range of objectives. The Capacitor consists of PWA support as well that enables developers to write an app and then publish it on the app store.

– Ionicons 4.0
Ionic 4 has all-new icons known as Ionicons 4.0. They are designed for iOS, Android, web, and desktop domains. These icons have the web font and they offer support for the SVG (Scalable Vector Graphic). Ionicons 4.0 are revamped icons with reduced size and remain compatible with both Android material design and iOS trends.

Ionicons 4.0 are aimed at assisting the Ionic app development company to build apps with native-like look and feel.

– CSS Variables
They are included for making the app’s look more sophisticated simply by making a slight change in a few variables. This is one of the most useful features of Ionic 4 that enables the app developers to get rid of using different tools to make changes in the variables. What’s more, this feature can be readily used by web developers as it is based on CSS.

– Web Components
With the arrival of Ionic 4, there is a web component available for every component. Web components are basically web platform APIs that facilitate app developers to create customized and reusable HTML tags. These tags can be used on a web page and web application development. In a way, web components can help developers create high-performance web apps without spending much time and efforts.

Web developers can also use Ionic 4 to make web apps without writing too many codes thanks to the integration of web components. These web components consist of four major elements namely HTML Template, Shadow DOM, HTML imports, and Custom elements.

– Lazy Loading
It is a design pattern introduced in the Ionic 4 to differentiate the component’s initialization. This feature can enhance the app’s performance while decreasing the load time. Lazy Loading name is probably given because this feature loads the app only when necessary. It can divide the app’s load time in a various bundle.

– Ion-select Popover
It is a dialogue that appears on top of the current page for indicating the overflow actions. This popover highlights any misfit action in the navigation bar. This is apparently a minor feature but it can save the developer’s time by pointing any error instantly.

– Color Changes
Well, Ionic 4 has a new default color and it looks quite impressive.

– ion-Searchbar
This feature enables the developers to search from a huge collection. It is a text field with nine bar styles and reduces the developer’s time in searching for specific tools or components within the platform.

– ion-Picker
Ionic app development involves different steps. Any feature that enables the developers to maintain the proper order is appreciable. One of such features of Ionic 4 is ion-Picker. It displays necessary columns and button on the top of the app’s content and at the bottom of the viewport.

– ion-Backdrop
These are full-screen components that overlay the other components. It is possible to dismiss another component
Other noteworthy features include ion-Ripple Effect for adding the ripple interaction effect in the app’s Material design, ion-Route to match the selected component with the URL, etc. Ionic 4 is developed by keeping the few challenges faced by developers in the previous versions of Ionic. The latest version seems capable of taking Ionic app development to the next level in coming time.

Migration from Ionic 3 to Ionic 4 requires lesser efforts than that from Ionic 1. However, the migration process takes more time to complete. You can hire Ionic app developers for migration. The migration can help your app leverage all the benefits of the latest Ionic 4 framework.

Concluding Statement
With the advent of Ionic 4, the Ionic framework has become more interesting for the developers. Currently, it is in the Beta version. We can expect more features and improvements will come in the final release of Ionic 4 to make Ionic app development services more advanced and result-oriented.

When it comes to developing hybrid apps for your business using Ionic, PhoneGap, or AngularJS, Solution Analysts remains a preferred choice for many enterprises globally. What are your project requirements? Just connect us through sales@solutionanalysts.com and make your business ready to leverage the benefits of feature-rich hybrid apps.