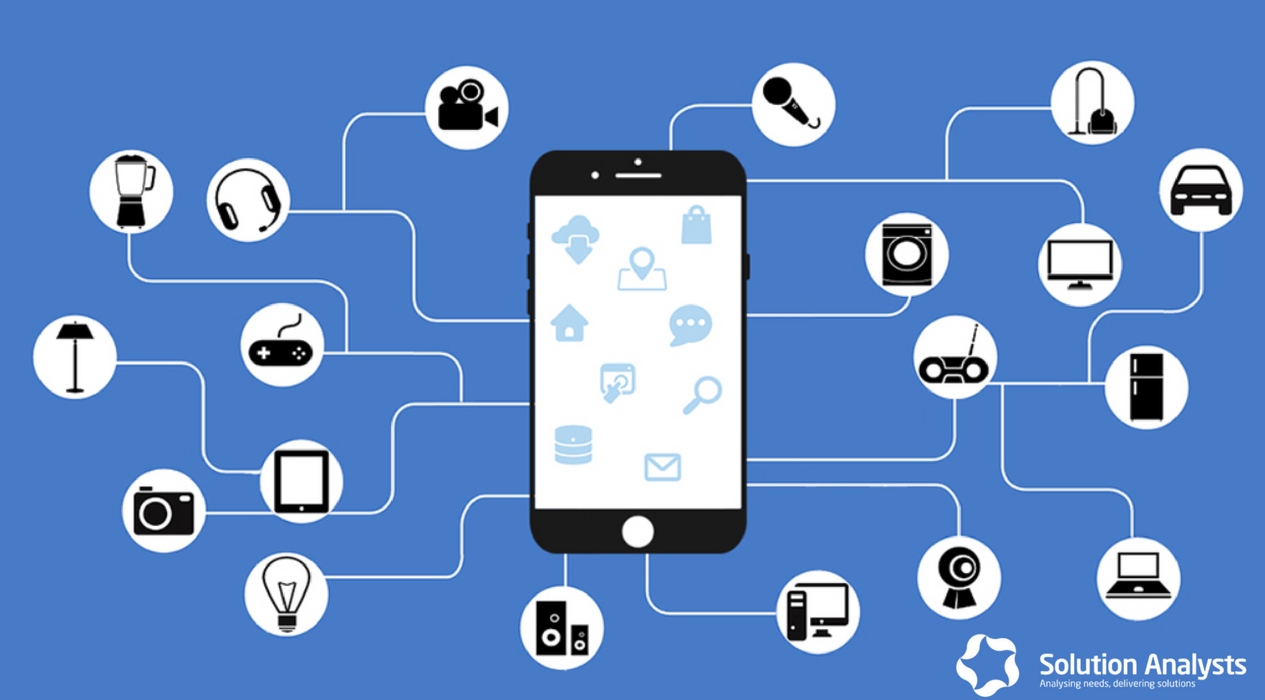 Creativity and innovation are synonymous with the Internet of Things (IoT) concept. As enterprises have started embracing IoT, IDC has predicted that the worldwide spending on IoT will cross $1 trillion marks by 2020. The spending estimate, as given by IDC, will remain around 14.4 percent CAGR (Compound Annual Growth Rate) through the five-year horizon from 2017 to 2021.

As the trend of connecting physical devices in the home or the office gains ground, we can mention that controlling them through handheld devices like smartphones and tablets also gain a fast momentum. It gives rise to the IoT mobile apps. It is interesting to see how IoT impacts the mobile application development.

It all started in 2011 when the software giant Google introduced Nest thermostat that can be controlled by using the smartphone. The concept is then broadened by the iPhone maker Apple, when the company launched Apple Watch, which is connected with the iPhone at the initial stage. The IoT concept fosters innovation as it facilitates any device or gadget to be controlled or managed by the existing technology.

As a fast-growing technology, IoT touches various industry verticals including healthcare, agriculture, education, and energy. When we talk about smart cities, smart retail, and smart industries by implementing the IoT concept, the mobile domain always provides scope to access the IoT-enabled devices. Mobile apps are useful to access IoT ecosystems. Both IoT devices and mobile apps are two sides of a coin. They complement each other to create the third product, which is highly useful for the enterprises and enables entrepreneurs to stay ahead of the curve.

Here we give a few ways in which IoT can affect the mobile app development:

1. Makes life easy – IoT makes life easier for both the users and the app developers. It facilitates interactivity of the devices with a mobile app to manage a lot of tasks. It reduces the efforts of app developers in building the app while enabling them to come up with more user-friendly and innovative app solutions.

2. Changes focus – The mobile app developer’s focus always remains on making the user-friendly interface. But, with the advent of IoT, the focus is now shifted toward establishing an effective integration between the smart devices or sensors and the application.

3. Emphasizes on app security – The internet-enabled devices use the user’s data. It is possible that when these smart devices pass on any sensitive information, the cybercriminals take an advantage and capture the data. Therefore, mobile app developers need to take care of making IoT apps more secure and safe for the users.

4. Promotes Specialization – IoT is a unique concept and requires specialization to implement in a proper way. IoT-specific apps require additional skills, and the mobile app developers have to develop these skills to stay competitive. It is necessary for them to become a specialist in the IoT technology to grab the opportunities.

5. Brings Modification – The futuristic mobile apps need to have support for the connected devices or say, IoT. In the coming time, apps that do not support IoT will be at risk of throwing out from the market. In a way, IoT brings modification necessity. Worldwide, mobile app developers spend more time in making their apps adaptable to smart connected devices.

An IoT mobile app can serve many objectives of the business. Here we give a brief account of the benefits offered by IoT-focused mobile applications:

Location Independence – The IoT-based devices can be controlled easily with the smart devices from anywhere. It means that even if you are far from the workplace, you can control the IoT network thanks to IoT mobile apps. In a way, you can get rid of dependence on location.

More Convenience – Apps remain more convenient for us because we use the smartphone more frequently as compared to the laptops. When it comes to track and manage the IoT network, a mobile app is more useful than websites.

Notification Facility – Apart from controlling IoT devices, mobile apps come with other functions including notification facility and device-based features. An app can give you a real-time update on the IoT network. For example, you can get a notification about switching off the electrical appliances after office hours.

Social Media Integration– An IoT mobile app can be integrated with social media network so that you can remain in touch with employees and people at once. Irrespective of location and time, you can stay connected with the stakeholders of your business and customers through a social media available in the app.

Increased Flexibility – Mobile apps have flexible accessibility. You can get an offline functionality as well for the limited purpose. You can access the mobile app through a smartphone on a 24/7 basis from any part of the world to monitor and control the connected devices.

Because of these benefits, we can certainly expect that the IoT concept is all set to integrate with the mighty mobile technology. It will bring big changes in the traditional mobile app development process.
Time is just right to get the IoT-friendly mobile applications for the enterprises. For example, if you want to control integrated sensors of the plant or workplace through a smartphone, an IoT mobile app is a right solution for you.

The mobile app development domain is exciting and challenging at the same time. When it comes to targeting a specific audience or a niche market, the IoT approach can be integrated into the app development process according to the client’s requirements to get tailored IoT mobile app solutions.

Developing mobile-enabled IoT solutions is our forte since inception. At Solution Analysts, we strive to serve the global enterprise clientele with the best-in-class IT solutions. Hire IoT developers to get our exclusive services in a cost-effective way.