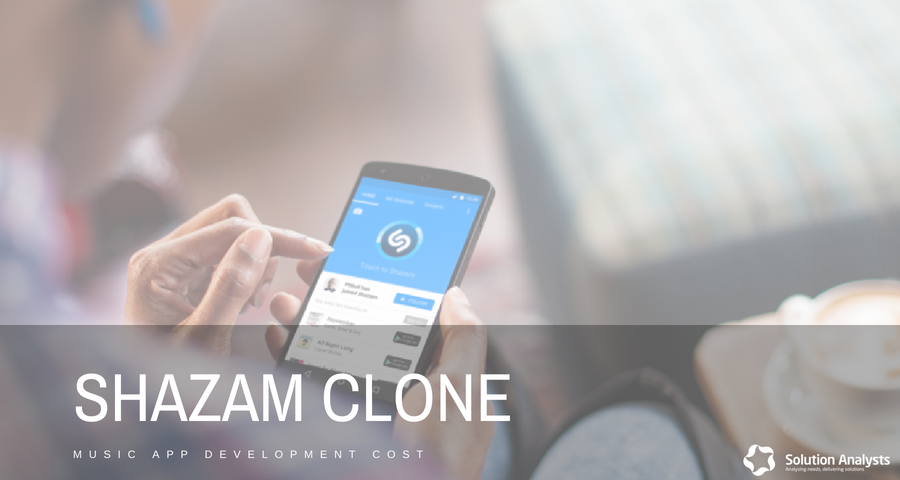 Shazam has set new milestones in the app world as the music lovers have accepted it with open arms. It started with a simple concept and basic services back in 2002. Today’s Shazam is yesterday’s 2580 service. People dialed this number to recognize the music and get an SMS with a song title and artist name. The app still works on the same concept but with the integration of technological advancements, Shazam has defined the standards of music mobile app. Here we discuss the factors that determine the cost to develop a music mobile app like Shazam.

Shazam is one of the most famous mobile apps with over 1 billion downloads. The app enjoys over five percent market share of all music downloads globally. Let us dive in its functionality before going through its approximate cost.

Shazam is basically a music identification or recognition app that enables the users to identify the music instantly. It is easy to find artists and songs with Shazam. It also offers the facility to buy the music directly. Any app like Shazam should be capable of identifying the music and show it to the users. Basically, such an app is like a search engine for tracks and artists. It has a predefined algorithm for facilitating the user searches.

Shazam app’s real strength lies in its robust and impressive database of audio and TV shows. It can find even the weirdest and not-so-popular tracks. It gives every information regarding the selected track like artist biography, videos, lyrics, and the like.

Let’s have a list of key features that help Shazam stay ahead of the crowd:

Other interesting features include artist following and visual recognition capability.

Related Reading- How much does it cost to make a music mobile app?

How to identify cost components of Shazam-like app

Two key development factors for a Shazam clone or an app like Shazam are database integration and backend development that take up most of the time. Shazam has opened the new doors of opportunities for other apps.

Here are the key components that can decide the cost of a Shazam clone:
– Necessary Features
– Complexity
– Backend and Database Integration
– Customized Animation and Graphics
– Hourly rate of development

Apart from these aspects, platform selection also plays a vital role in deciding the cost. For example, Shazam app can work well on every available mobile OS as well as with a Mac OS. With the limited budget, it is advisable to go for a single native platform. What’s more, the iOS app development process is cheaper than Android app development because Android app requires extensive testing for a range of devices.

Talking about the hourly development rates, India-based mobile app developers charge the lowest rates anywhere between $25-$40 an hour. Considering all the factors, you can get a Shazam-like app for a single platform between $70,000 to $100,000 with a charge about median $30 an hour. The app development cost can go significantly high if the app is developed for multiple platforms. This is just an expected cost. A reliable mobile app development company can give you an exact quote as per the project requirements.

You can also opt for developing a music mobile app to strengthen your presence in a thriving music industry.

Let’s have a glimpse on the necessary features and other factors that influence on the cost of a bespoke music mobile application.

A customized music mobile application needs to have the following basic features to attract and retain the users:

It is advisable to include in-app purchase and push notification features for promoting app monetization efforts. A complex music mobile app also integrates chat functionality and events calendar to make it more user-friendly.

Here, it is fair to mention that when you opt for a music mobile app or an app like Shazam, you need to keep some amount aside for post-release expenses. Such expenses include ASO (App Store Optimization) efforts, marketing campaign, and miscellaneous charges.

If the budget does not permit, it is better to go for a custom music mobile app instead of an app like Shazam. A music mobile app with a basic functionality costs you almost a half than that for a Shazam clone.

Be it an app like Shazam or any other music app, your music business can get a competitive edge over your peers. A higher RoI and enhanced brand value are guaranteed with a seamlessly performing app. But then, you need to make sure that your app project does not fall into the wrong hands, otherwise, it may end up wasting a lot of time and money.

If you want to leverage the benefits of the flourishing music industry, a customized music app is all you need. How about getting an insight of a music app like Shazam or developing a tailored music app to expand your music business? As a renowned mobile application development company, we give you 360-degree app solutions.

You can also hire mobile app developers to get cost-effective development services with exclusivity. Contact us with your requirements and get the ball rolling.